Happy Victory Day!
On the eve of the holiday, we heartily congratulate you on the great Victory Day! May 9, 1945 in the memory of the public is a symbol of courage, steadfastness and stability of our people. Heroism...
read more
END_OF_DOCUMENT_TOKEN_TO_BE_REPLACED

Fauna of the National Park "Buyratau"

The information provided is compiled from literature and our own research and visual observations.

The ichthyofauna of the SNPP Buyratau is very poor. This is due to the fact that its territory as a whole is characterized by a larger number of closed basins, mainly with shallow salt and brackish lakes. The largest are Lake Bozaigyr (44 hectares) and Lake Azhbai (55 hectares). There is no information in the literature on the fish of the park's lakes. At present, the habitat of fish has been established only in the lake. Azhbay, in which the water, in terms of chemical composition and content of biogenic elements, is suitable for aquatic life. In the lake. At present, only the goldfish - Carassius quzatus (Linnaeus, 1758) and the common carp (carp) - cyprinus carpio (Linnaeus, 1758) live in Azhbai. Crucian carp is an aboriginal species, carp is the result of introduction.

Amphibians in the "SNPP" Buyratau "are represented by two types. These are: the green toad - Bufoviridis (Laurenti, 1768) and the sharp-faced frog - Ronaarvalis (Nilsson, 1842). Both species are sporadically distributed. They are found in temporary and permanent water bodies and on their coasts, in various watercourses, and are small everywhere.

Three species of reptiles were found on the territory of the National Park "Buyratau". The fast lizard Lacerta agilis (Linnaeus, 1758) is widespread in forest, forest-steppe, steppe biotopes; the steppe viper, Vipera ursine (Bonaparte, 1835), also lives there. In humid areas, closer to water, there is an ordinary snake - Natrix natrix (Linnaeus, 1758). The number of the quick lizard in the park is high, the steppe viper and the common one are already common, but not numerous.

The avifauna of the national park is represented by birds of the steppe, shrub, forest and wetland ornithological complexes. Situated in the central part of the Central Kazakhstan flat-lowland country, it creates a favorable biotope for many bird species. Its composition is determined by the main landscapes prevailing in this region, as well as the ranges of individual bird species, among which, along with widespread inhabitants of open spaces.

The following species of animals from the Red Data Book are found in the park (see the table indicating the nature of their stay in the park): 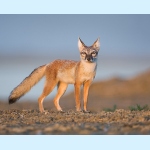 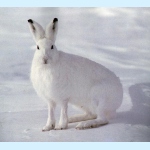 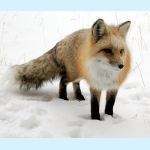 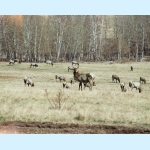 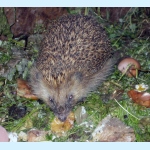