Happy Victory Day!
On the eve of the holiday, we heartily congratulate you on the great Victory Day! May 9, 1945 in the memory of the public is a symbol of courage, steadfastness and stability of our people. Heroism...
read more
END_OF_DOCUMENT_TOKEN_TO_BE_REPLACED

40 km in both directions duration: 4 hours 10 minutes including stops.

7-9 people (psychological comfort, for the purpose of maintaining security while visiting sites). Limit tour groups per week – no more than 7-14 groups, 1-2 groups a day.

16-18 people per day. Restrictions inside tour of the season in the fire-dangerous period.

Along the trail in the distance their visibility is set to the direction of motion. The starting point of the installed sign with the name of the route, its length, the rules of visiting of especially protected natural territories and itinerary.

It is prohibited the passage of the route in rainy windy weather, fires, Smoking in non designated areas. Strictly prohibited the use of alcoholic beverages and being on the trail in a drunken state.

Brief description of the route

The route passes through a protected zone in the territory of the branch «Ereymentau» SNNP «buiratau» and the earth Turgay rural district. In the direction of the radial. The movement of a tourist route starts from the village Balykty on a country road with hard surface (grader) in a South-westerly direction towards mount Falcon (hereinafter Joushou).

During the tour tourists will pass Balykty village, which is located at a distance of 12 km in South direction from the road of Republican importance Astana - Pavlodar.

The ecosystem of the tourist routes: forest-steppe (mixed forests combined with grasslands and shrubs). During the route you can find a colony of marmots.

The locals in the summer, swimming in this lake and catch fish. It is home to carp, perch, pike and other fish species.

Well-known in Ereimentau district are mountain Husoy. It is a mountainous country, since 1968, related to protected areas.

Husoy located at the distance of 5 km in the Western direction from the village Balykty. The stories of old-timers on this mountain sooner bred hunting birds such as falcons. The height of the mountain is 450 m above sea level, from where you can see nearby towns: Timothy, Novomarkovka, Araali, Tori, Balti and the television tower of the city of Sochi.

Mountains are attractive primarily to the fact that under the influence of various natural factors (temperature, wind, rain, etc.) took a fabulous view of one of the mountains resembles the face of a stern warrior, the other a huge mushroom, the third – the strange animal, and so on.

The area is perfectly suited for the development of eco adventure tourism. The vastness of the territory and the sparse population allows to establish the optimal load on the area of Yereimentau mountains not to the detriment of the natural area. It is also convenient to practise climbing and competition climbing.

A fairly diverse fauna. The tops of the mountains have long chosen the eagle, the Falcon, the expanse here, ruddy shelducks, Demoiselle crane the Demoiselle cranes, bee-eaters. There are frequent meetings with ROE deer, hares, foxes. In Rasputina and valleys quite often come dangerous and bloodthirsty predators – wolves. There are grey and white partridge and the black grouse.

There are consonant Husoy mountain, mountains such as Artichoke, Ersoy and Asay.

On the route are the burial monuments of the bronze age. From mount Husoy on a country road at a distance of 12 km to the North is the iconic archaeological monument of the Turkic period As warrior, which translated into Russian language means «warrior.»

A unique monument is represented by a pair of ceremonial enclosures, built of stone slabs, on the Eastern side one of them has a stone sculpture, carved and installed in honor of one of the leaders of the Turkic tribe.

Also of interest, as a classic type of the monument of the Turkic culture, widespread on the territory of other regions of Kazakhstan and characteristic culture of the Turkic tribes of Central Asia, preserved in the immediate vicinity of the capital of Kazakhstan. The return of a group of tourists in the village Balykty is done in the same thread movement.

Brief description of the difficult sections of route:

Dirt road throughout the route, as well as the most difficult are the ascent and descent on the mountain «Gaoshou».

Possible natural phenomena and actions of the group as they occur:

In preparation for the tour should use the data from the weather service, due to the forecast of storm wind and thunder hike you want to cancel. For protection from rain is desirable to have the capes, it is recommended to take refuge under the forest canopy, during a storm, on the contrary, not to stand under trees and stay on the hill. 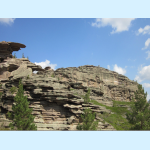 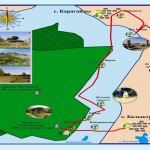