Happy Victory Day!
On the eve of the holiday, we heartily congratulate you on the great Victory Day! May 9, 1945 in the memory of the public is a symbol of courage, steadfastness and stability of our people. Heroism...
read more
END_OF_DOCUMENT_TOKEN_TO_BE_REPLACED

31.2 km in both directions, a duration of 4 hours and 15 minutes including stops.

10-12 people (psychological comfort, for the purpose of maintaining security while visiting sites). Limit tour groups per week – no more than 7-14 groups, 1-2 groups a day.

20 - 24 people a day. Restrictions inside tour of the season in the fire-dangerous period.

Along the route at a distance their visibility is set to the direction of motion. The starting point of the installed sign with the name of the route, its length, the rules of visiting of especially protected natural territories and itinerary.

It is prohibited the passage of the route in rainy windy weather, fires, Smoking in non designated areas. Strictly prohibited alcohol consumption and finding the route in a state of intoxication.

Brief description of the route:

The route passes through the territory of the branch «Ereymentau» in the buffer zone and the territory Turgay rural district, in the direction of movement is radial. The movement of a tourist route starts from the village Areally on a country road in a North-westerly direction.

During the route tourists get acquainted with the complex archaeological expedition that is exploring unique Turkic monuments and their culture.

The ecosystem of tourist routes:

the steppe plains (mixed grass-derznovenno-grass steppe. During the route you can find a colony of marmots, wild ducks and geese.

At a distance of one km near the village Areally river CEDA, which translated into Russian language means «Poor, poor». The locals in the summer, swimming in this river and catch fish. There are carp, perch, pike and other fish species. The river originates from the river «Uma», the length of which is 22 km long and flows into the river Kada, according to the history on the territory adjacent to the river Kedey lived genus Kerey.

The length of the river is 15 km away. Keda Spring, during snowmelt, the water level in the river rises strongly, to the level of 5-6 m.

From the river CEDA on a country road at a distance of 1 km 400 m in a North-westerly direction is the archaeological site Araali 4, dated to the late bronze age. The fence of stone monuments. Experts suggest that the burials belong to the iron age extreme. There are more than hundred designs. There are family usypannye niche pair and single.

The return trip goes in southern direction along the river CEDA on a country road, a 2 km 300 m.

During the excavation of month 4, it was discovered the burial of a child (age 7-13 years), whose height is 90 cm, the skeleton of the head lies in a North-westerly direction, in his right hand he held the knife, as well was discovered the lamp, the elements of the bridle etc. dumping refers to the 12-13 centuries of the Islamic period.

The burial ceremony was made with elements of shamanism.

At the distance of 400 m from a given object in the South-West is a monument to the Karagaily 3, which refers to the bronze age and Turkic period.

The entire valley is a burial monuments of the bronze age. For the site visit Araly 2 tourists from Araali 3 you must return to the road, in a North-westerly direction, then turn right and walk 700 meters to the monument.

On the road they can see the other graves.

On site in addition to cemeteries and monuments, there are also historically significant places as the valley of the great estates of our ancestors. The remains of the manor is at a distance of 1.3 km from Araly 3 in a South-westerly direction.

After touring the area, tourists are back on the East side of the village Karagaily across the river CEDA.

The return of a group of tourists in the village Areally runs the same leg movement.

Sightseeing objects on the route are: river Kada - originating from the river and a tributary of the Kumai river Seleti, Araali 4 - Araali 3 - Araali 2 - Estate - Araali 1 - OS Batyr.

Brief description of the difficult parts of the route:

Possible natural phenomena and the actions of the group as they occur:

Before departure on a route would need to be met, due to the forecast of storm wind and thunder-the campaign to cancel. To protect from the rain to have a cloak. During a thunderstorm, do not stand on the hill. 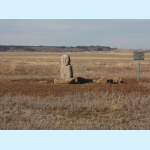